Story of The Black Pearls 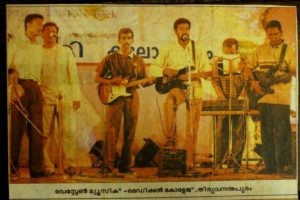 Music was always my passion right from the beginning. My Parents especially my mother was my first and my main Guru. She introduced me to the world of western parts singing. Both my parents had a guitar each and four of us including my sister had music sessions with instruments on most days before the evening prayer. They even bought me a keyboard.
Sunday School was one of the greatest platforms where I could expose my talents, for several years I was either the secretary or treasurer of the “Balasamajam”. Most often I used to run the show performing any of the various activities including Singing, Monoact, Mimicry, Elocution, Quizzing, Skit and so on. We used to go out for various competitions and bagged many prizes.
Right from KG school in KMNSS School, Malappuram to primary School in Holy Trinity school, Trivandrum and to High School in Christ Nagar School, Trivandum, I was part of the School Choir. It was in Christ Nagar that my music aptitude became a serious business. Paramanandan Sir, the music teacher was my official Guru. In 1991 our School Choir won the 1st in the All India Radio (AIR) National Singing competition and 20 of us including the present celebrities Vidhu Prathap, Ronnie Raphael with our music teachers went to New Delhi for 2 weeks, stayed in Kerala House and under the guidance of K.P.Udhayabhanu Sir, We learned and sang songs in Sirifort Auditorium. After that, we had sung songs for the AIR also.

Thanks to Boney M and Abba , from whose songs I developed more interest in Western music. I still remember writing few poems during my childhood days.
The turning point towards making of a band was when I joined Medical College Trivandrum in 1998. I did my first western performance on the fresher’s day. The song was Milky way by MLTR and Dr.Vivek Krishnan was on the keyboard. The primitive band expanded on subsequent programs with Dr. Daniel Johnson on guitar and I remember playing Someday by MLTR.
It was when the junior batch came that I had serious interest in making a rock music band. Anish Lawrence was a great talented guitarist and luckily my neighbor also. Many days we sat together and sang lots of songs. It was the time when Vivek Krishnan became the Arts Club secretary and opportunities were flowing. Both of us performed for the evening dinner in most of the conferences(CME) held in our college. Most often the song was “ Alliyambal Kadavil”. Anish was rocking in the lead guitar. We were getting opportunities for competitions outside and expansion was necessary. Sarin joined us as the accompanying vocalist cum violinist. He is proficient in Karnatic music which I have not learned officially. Anoop Rajan is a talented guitarist and we got him as our rhythm guitarist. Initially for some shows we hired Shibu from outside and later we got Lakshmanan who was a professional Mridangam player as our drummer. It was the genesis of The Black Pearls. One hidden reason behind the name was that most of us in the band were dark. All the band mates were one year junior to me. We bought a second hand Base guitar and I took over the base also.

The first Black Pearl team with Jibu and Shaji. Standing from Left- Vivek, Jibu, Me, Lakshmanan, Shaji. Sitting from Left- Anish, Sarin, Anoop.
Meanwhile I am proud to have performed with the famous guitarist Baiju of Mother Jane in our annual day celebrations of my Kalagramam music school in VJT hall, Trivandrum. My teacher Biju Sir was my Keyboardist, my school drums sir, Murugan who came with us to AIR Delhi, in Drums. I sang Winds of Change, Words and Someday. Baiju’s performance was rocking
Back to Black Pearls. Inconveniences for some guys forced me to search for replacements. It was in 2002 when we got the greatest chance of performing for the Mathrubhumi Kalolsavam western music competition. We got Renjith on additional backing vocals and Gautham on keyboard. We won the second prize and was selected to perform for the finals in Kochi. We still had to change our team and we got some friends from BDS batch for the keyboard and rhythm guitar. We got Jobin who was 3 yrs junior to me as our drummer. Those few days were unforgettable. Eventhough we did not get prize, the whole program was like a festival and Shan’s live performance in the Indoor stadium was charismatic.

The Black Pearls went on and it was in 2003 that we had a chance to go for the intermedicals in calicut with Sarin, Lakshmanan and Jobin’s classmates including Abraham and Belvin as backing vocals, Aswin on keyboard and Vijay in lead guitar. We won the 3rd prize for the intermedicals.

The same team won the first for the intercollegiate contest held in Karyavattom, Trivandrum later.

The Black Pearls was almost dead for a long 10 years till it was rejuvenated with all new members in the team. Well, it is for now no more a rock band but a group of enthusiastic people interested in creating music albums.