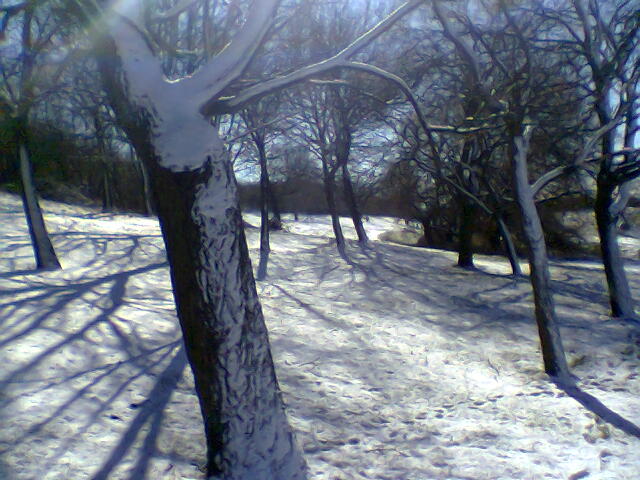 With good hope and dreams of a good career in medicine, I set off to UK to write my PLAB part 2 examination with Joe and Sarath. The STIC travel card gave us a heavy discount in our airfare. We took the Gulf air, departed at about 9.30 am on the 25th of May 2005 waving good bye to our friends and family. It was my first journey in a flight and also out of my country. The flight was full. We reached Abudhabi in 4 hours. Literally we had to run to the next terminal for the connection flight but not to miss the beautiful multicoloured massive central dome of the airport. The next flight was literally empty. It took 8 long hours to reach London Heathrow. During the journey, we saw residential apartments being built on the artificial island made in the sea in the shape of palm tree in Dubai

The view of the great Alps from above was fascinating. The snow covered mountains looked like the body of zebra. We checked out of London Heathrow at about 5.30 pm. Sajicha who was Sarath’s relative took us to his home in Harrow. Joe went to Leicester where his brothers stayed.

Next day Sarath and myself took a train from London to Sheffield  in “virgin train”. It was fast and luxurious when compared to our own railways.  Mohanbabu uncle who was my father’s colleague in agricultural college in Kerala was in Sheffield for his PhD. He came to receive us at the railway station. We met him infront of the W H Smith book house. We took a black cab and reached his home. The street  even when all the houses seemed monotonous was still looking neat and beautiful.

Uncle’s son Kichu was eager to show his pictures and music in his computer.  We stayed ther overnight and next day Sarath and me took a train to Manchester Piccadilly. We had to reach Old Trafford and so we took a tram. We had registered with Plabwise for the coaching for Plab test. The Plabwise people arranged the accommodation about 10 minutes walk from the coaching centre.  It was above a mosque and Islamic cultural centre. The place was so quiet and peaceful.

The next five days was the intensive PLAB 2 coaching starting from 9.00 am which went upto around 10.00 pm. Earlier we cleared the part 1 in India. Over the few days, we started improving our communication skills by interacting with our classmates and teachers who came from different countries like Syria, Nigeria, Pakistan, Egypt, Iran etc. We both were the only Indians.  Me and Sarath did combined study for the next days in our room. We made friends with guys from Lebanon and Pakistan who stayed next door. We learned the basics of cooking. Well actually most of it were precooked, heat and eat items. It was not the time for experiments too.

My cousin Kochuchayan came to visit us and took us for a trip around Manchester. The city was pretty huge. Eventhough  I didn’t have much interest in football, I was happy to visit Manchester United and Manchester City stadiums. I was told that the sculpture “Bee of the Bang” infront of the Manchester City stadium was worth millions. We also saw the renovated docks and the imperial war museum.  Finally we went to the Trafford centre shopping complex, better called a shopping city. It was so amazing and massive that we could only see a part of it.  I guess we could buy everything under the sun from there.  We settled in a ship shaped hall and had a chicken dish from the Nando’s restaurant.

We came back to London on the 10th of June. We had already booked for a mock test with PLABswamy in Eastham on the 11th. Not to our surprise, East ham was almost like India. We could hardly see any British people there. The difference was really felt

We took the PLAB 2 exam on the 13th June. By then Joe also came to Eastham for his coaching. All three of us took a trip in and around London city reminding of the movie  “Mandanmar Londonil ”. We travelled in the famous underground tube railway. By taking a day rider ticket, we could get down in lot of stations like Euston square, Leicester square, Piccadilly Circus, St.James park, Oxford Circus, Liverpool street, Monument, West Minster and so on. The view of the London eye, Big Ben and Parliament house were fascinating from the bridge over the Thames River. We saw London bridge from far.  We strolled for a while in St.James Park. It was huge.  There were a lot of swans in the park. A squirrel that was fed by a person suddenly jumped and climbed over my legs.

I came back to Sheffield on the 17th of June and stayed with Mohanbabu uncle for the next two and a half months. I roamed around Sheffield city by foot as well as in Kichu’s cycle. After passing PLAB, I concentrated on applying for jobs and running around hospitals in search of attachments. After many hundreds of applications, I got an attachment in Orthopaedics in Royal Liverpool University hospital with Prof. Simon.P.Frostick . I stayed with my cousin Nisha for the rest of the period in UK.  From Liverpool I had a chance to travel two times to preston for a course, once to Manchester for my MRCS part 1 exam and once to Doncaster for my occupational health check for an attachment (which I cancelled later). As Sarath was in Doncaster  I had an opportunity to visit him too.

In Liverpool I purchased a monthly bus pass to go to the hospital. With that, I could travel all around Liverpool any time. Apart from the career, it was a huge boost for my communication skills during my work in Royal Liverpool University hospital. Thanks to the patients from all over the world. Apart from the British, my colleagues came from different part of the word including India, Greece, Nigeria, Cyprus, Kyrgyzstan, Iran, Norway and Pakistan.

During my time in Liverpool, I visited the Liverpool Museum where I saw an Egyptian Mummy. I also visited Albert Dock, and The Liverpool Cathedral which was massive and amazing. I strolled through the China Market and saw the Liverpool Football stadium. Once a month we had Malayalam Holy mass conducted by Happy Achen. I met him earlier in Sheffield where he took me for the mass in Manchester. Infact the road trip from Sheffield to Manchester was so beautiful. The real country roads lie fresh in my memories. In both the churches, I had to introduce myself as it was a custom for new comers.

I had my first experience of snow in the Christmas season of 2005 in Liverpool. Me and Chakki enjoyed the evenings making snowman and playing with snowballs in the garden. I was excited to paint the fence of the back yard of our home during the stay with them. The change of the environment with the seasons was so amazing and I loved autumn the most.  I even made a poem out of the inspiration.     I got addicted to the first ever reality show in BBC, “Strictly come dancing” and became a fan of Darren Gough and Lilia Kopylova. To add cherry to the pie, they won the competition too.  Chakki and I practiced dancing after the show. She thoroughly enjoyed my stay there.

Unfortunately the change in the visa rules forced me to leave UK without a job. Of course I was upgraded from the attachment post to Honorary Senior House Officer in Orthopaedics.  I got the GMC registration and the Hospital got a free job. But this couldn’t go long and I had to leave.

We spent some money for all this adventure, but the gain was massive. A whole lot of experience in life; feeling of responsibility, independence, Cultural integration, improving communication skills, tourism and sightseeing,  career inspiration in Orthopaedics, the ever rainy and cold UK climate and by far the most, the ability to survive inspite of persistent hindrances and obstacles in life. The lessons that I learned from the British was

T was a very fast decision to visit Dubai and SriLanka on my return to India. Elsymmamma sent me the visa and I waved goodbye to UK from  Manchester airport on the 4th of May 2006. On the way to Dubai, I had a transit in Frankfurt airport which was so huge that I had to take a train inside the airport to go to the next terminal.

Elsymmamma and Babuchachan waited for me in Dubai airport. They didn’t recognize me at all as I was having a “motta thala”. I had my hair shaved during most of the time in UK. I stayed with them in Deira for the next 10 days and 4 days in SriLanka with my cousin Sajanchayan. Papa joined me there and we travelled all around Sri Lanka.  We were upgraded to business class on our way to Trivandrum