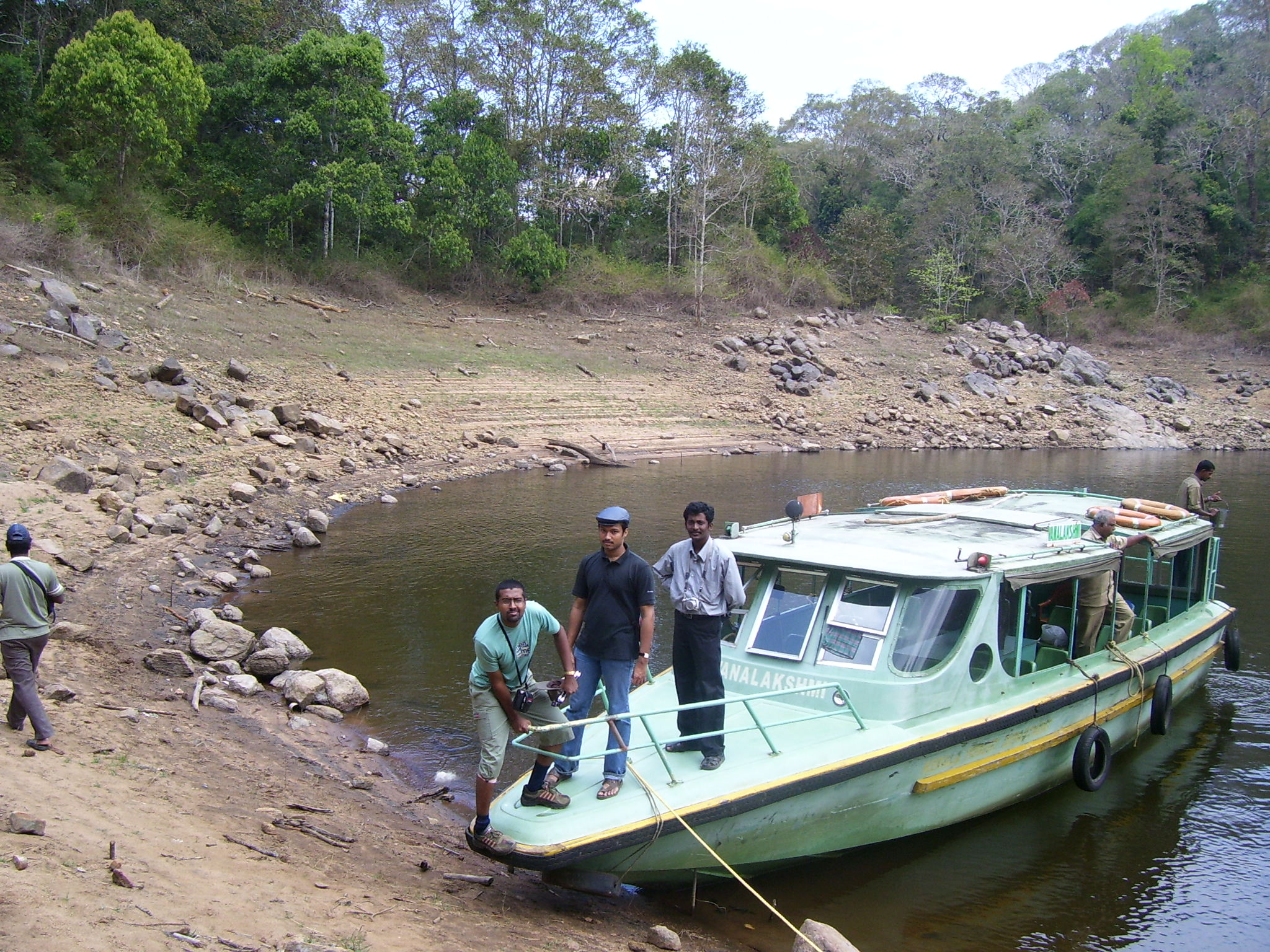 One of my greatest treks covering Thekkady, Rajakkad and Chinnar. I was joined by Harisankar, Midhun, Sarin and Lakshmanan. We started from Trivandrum in train to get down at Changanassery and from there to Kumily by bus.

We reached Thekkady by evening and stayed in Tiger Bangalaw. I recognized the cook Vijayan Chettan who was the same old guy who came with me and Joe to Manakkavala Bison Camp in 15/12/2004. We exchanged old memories.

I still remember a funny moment happened that day on our way back from the trekking camp, we saw the spine and pelvic skeleton of a large herbivore(probably sambar deer). Vijayan Chettan had held it upside down and seriously describing each parts of the animal. He thought it was the skull and mistook the obturator foramen as the eyes. After all he is a naturalist and not an anatomist.  I still remember his loud and hearty crepitus laugh in the bison camp.

We also met the DFO, Mrs Padma Mahanti and the range officers, Mr Radhakrishnan, Mr Karunakaran and also Mr. Basheer(whom we later met in Gavi when he was the warden and also in Thrissur Birdwatcher’s meet).

On the 25thmorning, we woke up in excitement. Everything set for the journey. Meanwhile we also met 2 foreigners, “the Timothy couple” from UK. With forest guard Chellappan and 2 other guides, we started off at about 9.00 am in the boat “vanalakshmi” owned by the forest department. We did not see any animals in the first 45 minutes. Unfortunately the boat with the tourists including the Timothys could not see any animals that day. I still remember my friends making fun of me when earlier that morning I was making a rapport with the Timothys by saying “this is the only place in kerala where we can see wild animals in close quarters”

But luck favoured us. As we sailed deep in to the forest interiors, we started seeing animals, a lone tortoise on a rock basking in the sun, wild boars lined up towards the banks to drink water, cormorants and later larger ones including elephants, gaurs and sambar deers.

We headed towards Mullakudy inspection bangalaw. Mullakkudy IB was situated at the junction where MUllayar and Periyar met to become Mullaperiyar. At the landing area we saw in the water a group of large tadpoles. Believe me, we have never seen larger ones than them till now. At the IB, we were amazed on seeing the size of the skull of a gaur kept there.

After tea, we got onto the boat and were dropped on the opposite bank after a 10 min ride. From there we did a 2 hr steep climb to Kumarikulam wireless station.The view from there was breath taking. The station was very near to the Kumarikulam pond and we spent some time there enjoying the beauty of nature.

From there we started walking and covered hillock by hillock, mainly grasslands to reach Thannikkudy forest bangalaw. It was built by the Travancore Kings.Nearby we could see remnants of forest fire that ate considerable area of forest.

In the Thannikudy IB, we saw large skulls of deers. At dusk, we had a stroll towards the nearby watchtower. We saw tiger pugmarks in the sandy areas of the river. The trail ended in a place where we saw remnants of tiger kill. The guards said that the tiger had come the previous night. We were in the land where the real king reigns.

We also saw foot marks of other animals like herd of wild elephants and wild dog. We joined the guards at night for fishing and got “kooral” and had them for dinner. The day was really long and tiring for us and all we needed was a good night sleep.

We set off at dawn along the periyar river, proximally to Mlappara. On the way we saw a viper, gaurs, elephants and heard a sound which the forest guards told that it was of a bear.

We tied threads on a tree as a ritual where any person who makes the first trip was supposed to tie a thread to a particular tree. All the way, the views of periyar and its valleys were breath taking. We again saw pugmarks of tiger and also its scratch marks on a particular tree. Mlappara remains the deepest area of periyar tiger reserve that we have explored. The officers in the forest station of Mlappara were very cordial.

We reached Thannikkudy by around 4 pm for the lunch.On our way back we saw a herd of elephants. They were around 8 of them. Their positioning seemed so planned that the two little ones were standing in the middle and all the adults were feeding around providing good cover to the calves.

After a refreshing bath in the river, we walked to the watch tower. We came across a herd of elephants there also. This time we got “kuyil” fish.

On 27th morning, we headed towards Mullakudy through a different path. We saw huge tadpoles, skull of sambar deer and also hornbill. We took bath in the reservoir. From Mullakudy, we took a jeep. The journey was quite adventurous. We reached  a place called Poovarasu and saw boars, skeletal remains of elephants.

We saw a group of hornbills. From there we went to Mangaladevi temple. Public were allowed to the temple only one day in a year. We were lucky to go there on a peaceful and silent day. We had a breathtaking 360deg view from the watchtower. We saw the thekkady reservoir, Periyar tiger reserve, Western Ghats border and the huge Tamilnadu plains.

We reached Thekkady back by evening.

On our way to Rajakkad, We took a lodge in Nedumkandam and stayed there. On the 28thmorning, we went to Mangathotti and visited our friend Paul who was a health Inspector. We visited Senapathi PHC and Mohan Chettan;s studio.

We visited Kuthungal Waterfalls near Rajakkad that evening and joined Paul chettan for fishing and got fishes like ‘paral’, ‘Neikooral’, ‘Sucker catfish’, ‘prawns’, ‘kallemutty’ and lots of other fish. The fry was yummy.

Next day we did a road trip to Chinnar wild life sanctuary via munnar and Marayoor and we saw “ kezha Deer”, boar, spotted deers. At 9 pm, I took the bus back to Trivandrum with lots and lots of thrilling memories.