The Andaman Island I landed 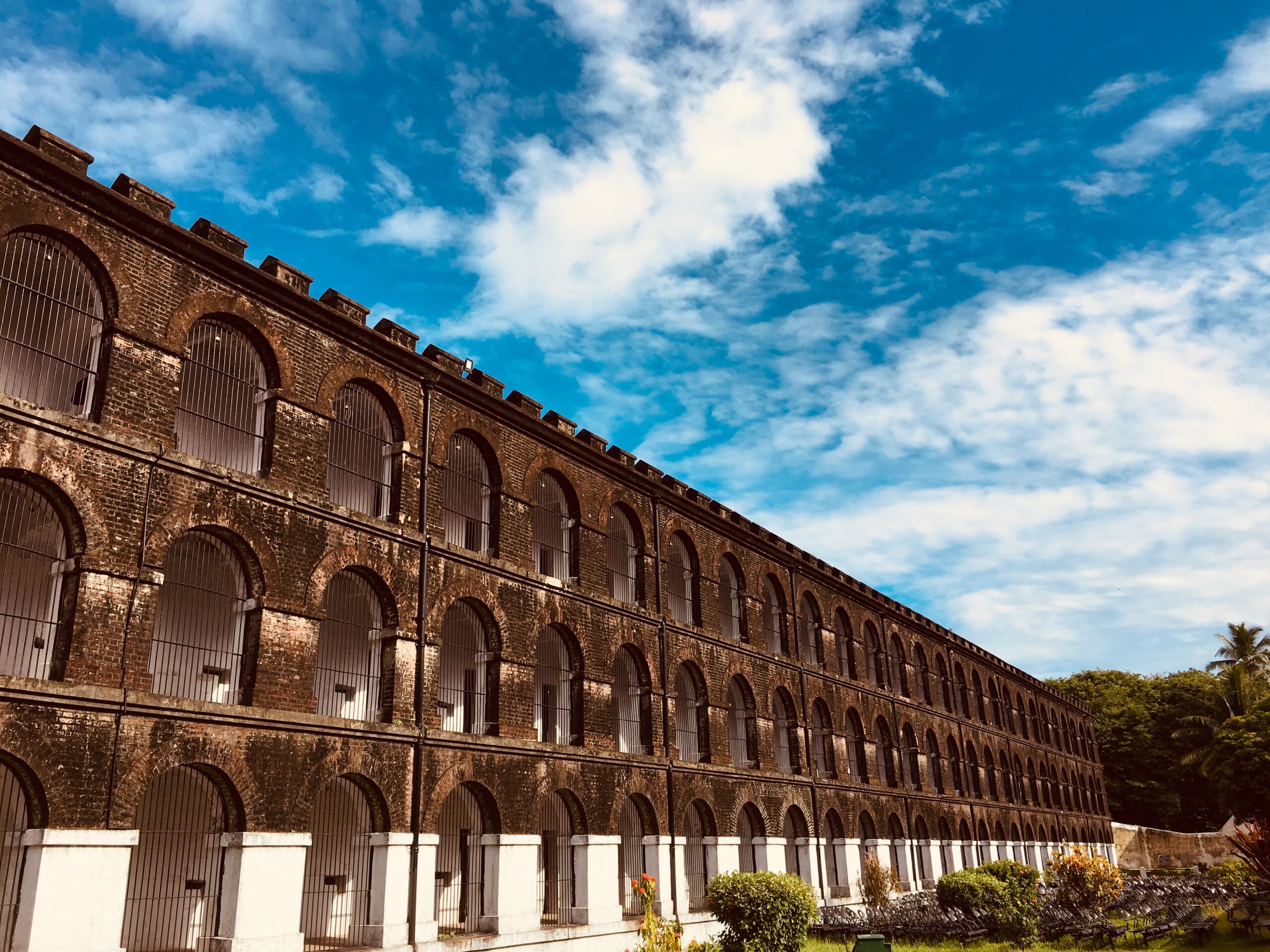 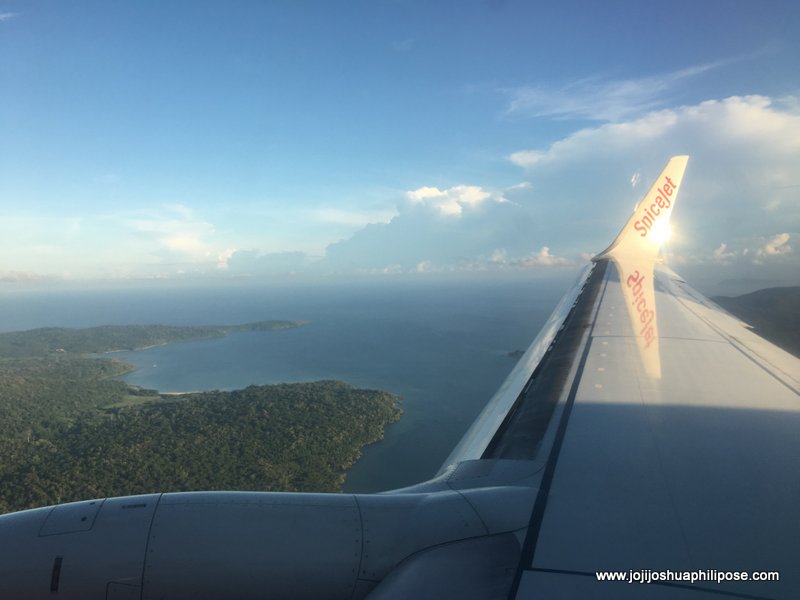 I have had wonderful experiences living in the Western Islands of our country(Lakshadweep). Those were coral islands. But I knew the eastern ones could be totally different and I always wanted to visit Andaman islands. The opportunity came when Roshin’s and my  parents visited there for a christian mission annual conference in 2018. They went a week ahead for the meeting . Jonathan, Myself and Roshin started on the 18th October, 2018 for an exciting 1 week journey to the Andaman islands. We took a flight from Cochin to Port Blair with a layover at Chennai. We were quite excited to see the Legendary actor Kamal Haasan at the Chennai airport.We reached by around 4.00 pm and was quite saddened to see the airport being named after a staunch supporter of British colonialism and the traitor who was implicated in  the assassination of the father of our nation.

The same evening we went to the famous CELLULAR JAIL. There was a light and sound show. The quality of the program was nowhere near normal standard and also in comparison to the one that we saw in Delhi Akshardham. Moreover it was a complete over glorification of Veer Savarkar. The nearby park also was named after him.

The next day(19/10/2018) we started off at 3.00 am along the Great Andaman Trunk road to JIRKATANG Check post. We reached there by around 5.30. We were supposed to pass through the JARAWA reserve area. Vehicles were sent only as convoys at particular periods of time. The first batch was to start by 6.00 am. We got some information regarding the flora and fauna of Andaman islands from the photos kept there. Nearly 2 hours of drive along the Jarawa reserve, we reached Baratang middle strait Jetty. From there We took a ferry to the opposite bank. 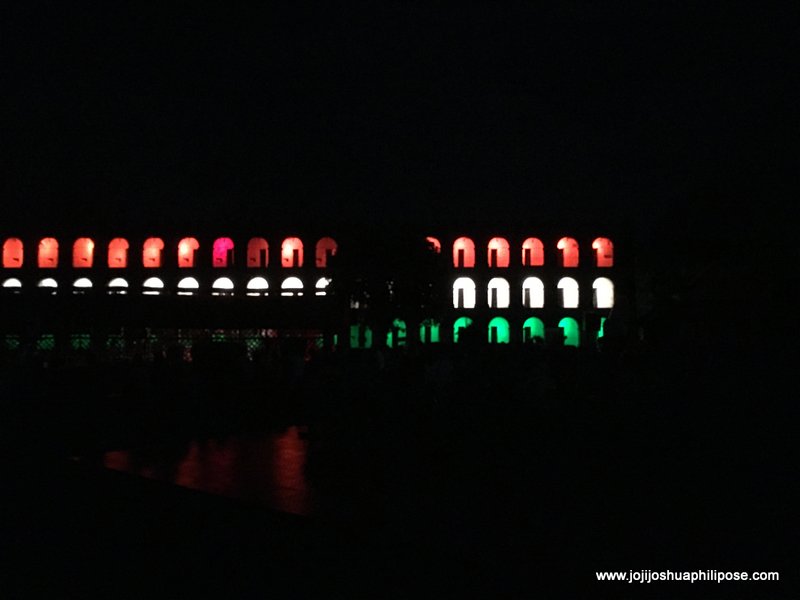 We were taken in a small speed boat from there to another part of Baratang island.The journey took half an hour and as we travelled, we got into smaller distributaries between the thick mangroves and it reminded me of the movie Pirates of the carribean.We reached a small jetty and walked for 20 minutes. There were a lot of travellers along with us. We reached the mouth of a huge cave which was formed by limestone. We got inside the LIMESTONE CAVE around 100 m and saw different types and colours of limestones in different formations including stalactites, stalagmites and helictites. It was quite a different experience. We came back to Baratang Jetty and from there we were taken in another vehicle to visit MUD VOLCANO. I’ve not heard about it in the past. 8 out of the 11 mud volcanoes are in Baratang and middle Andaman island. It was interesting to see the active volcano spitting mud. 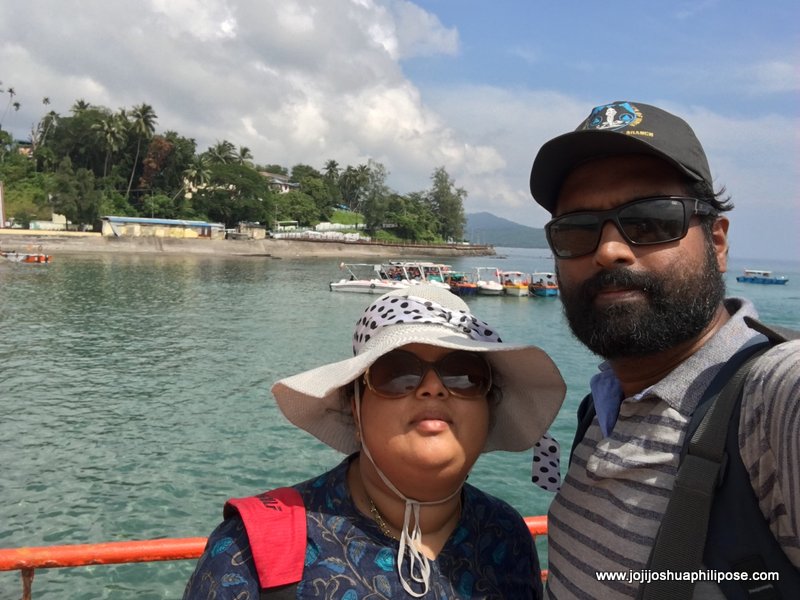 On the way back to South Andaman, we passed again through the Jarawa reserve and this time we saw the indigenous Jarawas walking along the road. These guys were really exploited by the locals.We were not supposed to stop the vehicle or open windows. As usual there were lawbreakers and these Jarawas including children would peek inside to get or snatch something. They would exchange those with tobacco in the local shops. Some of them wore no dress, some just enough to cover private parts. In one place we saw a big lady carrying a huge wild boar on her shoulders and walking. She would have hunted it for food. That scene got really imprinted in my memory folder. We saw some deers in the reserve. On the way as we were nearing the city, the car tyre got punctured and fortunately it was sorted soon.

Next day was for local trips. We took the speed boat from main jetty to NORTHERN BAY that took around 20 min. The activities in Northern bay include snorkeling, scuba diving, semi submarine,sea walking, glass boat ride etc. Me and Jonu just had a good time swimming in the beach and as usual Jonu enjoyed it so much,  it was hard to get him out of water. After spending 2 hours there, we were taken to ROSS ISLAND which was just a 10 min ride from the northern bay. The scene over there took us to many decades back. There remained the ruins of a great empire which ruled our nation. It had remnants of offices, quarters, church, temple, printing press, bakery, recreation centre, clubs etc in such a dilapidated stage . There was a large pond on the island.There were a lot of deers, peacocks and rabbits roaming around the island. We walked around the island and the eastern side was called FERRAR BEACH. We spent some time there. On the way back to the main island, we saw the TSUNAMI MEMORIAL and memorial of ‘BATTLE OF ABERDEEN’. In the evening we travelled to the southernmost tip of South Andaman island, MUNDAPAHAR and we visited CHIDIYATAPU BEACH. It was a beautiful place, quite unique unlike any other beach. There was a beautiful estuary and also green mountains in the background. It was also called sunset point and bird island. We were told that there was a mini zoo over there. Few lifers that I saw from there included Red breasted parakeet and collared kingfisher. It’s a place with good potential for landscape photography. Back in town, I was happy to see my old school friend, Santhosh in a restaurant where we went for dinner.

On 21/10/18 we attended Holy mass in the Orthodox Church. In the afternoon we visited the CELLULAR JAIL. On the first day it was late evening and we could see only the light show. This time we roamed around the jail. It is a must visit place for every Indian. We could understand a little bit of how our freedom fighters struggled during the period of fight for Independence. We could see GB Pant hospital nearby.Among the 7 arms of the building only 4 remained and the rest were demolished. There were 663 cells in the Jail and names of the freedom fighters were written there which included people from every part of the country. It was interesting that the majority of the names were from Bengal. We saw a lot of solitary and condemned cells. We saw many machineries used previously  in the jail and also the place of execution.

Next day we started early morning at 6.00 am for another long journey to HAVELOCK ISLAND in Green Ocean 2 liner at a speed of 40nm. We reached there by around 8.30.The guides took us in another speed boat and we landed in ELEPHANT BEACH. Every place was so unique. Jonu had a good time as he swam in all the beaches that we went to. Later we checked in at Ocean blue resort and in the evening we went to RADHANAGAR BEACH. Though there were too many people, the beach was clean and beautiful. Me and Roshin had a long stroll as we watched sunset. As we were going back there was a small drizzle which really cooled the place.We stayed on Havelock island that night.

On 23/10/18, we took the same Green ocean 2 to reach  Neil island. The boat had a cafeteria also inside. We spend some time swimming at  BHARATPUR BEACH. Then we went to LAXMANPUR BEACH where we saw  NATURAL ROCK BRIDGE. We had to walk some distance to reach there. It was low tide time  and  we did a reef walk. We could see a lot of Corals, sea cucumber, sea snake, clams, sea urchin, fishes and also a lot of  birds in that area. Back to PortBlair.

Next day we visited the CHATHAM SAW MILL. Andaman Padauk is the official tree of the Union Territory. It’s used for making furniture.Later we had a drive to MOUNT HARRIET NATIONAL PARK. On the way we saw a point where the Northern bay was seen. That is the picture seen on the back of a 20 Rupee note. The place was beautiful. There was information regarding the flora and fauna of the island as well as replicas of huts where the tribes lived. Mount Harriet is the third highest peak in Andaman and Nicobar islands. It was the summer capital of the then Chief commissioner during the British Era

We also visited the ANTHROPOLOGY MUSEUM as well as the SAMUDRIKA MARINE MUSEUM. Both were very informative. The Andaman islands are home to 4 Negrito tribes- The Great Andamanese, Jarawas,Sentinelese and the Onge. Nicobar is home to 2 Mongoloid tribes- The Shompens and the Nicobarese.

On 25/10/18, we visited a nearby JOGGER’S PARK on top of a hill where we could see the airport, the runway and the flights landing and taking off . It was a unique site.We visited the SAGARIGA EMPORIUM in the city. We also found time to visit a nearby CORBYN’S COVE BEACH. We heard that the only active volcano in India in the Barren Island of Andaman had become active again.

Due to the tight schedule, We missed the opportunity as there was a 6 hour one way ride which would not have been possible. We took the afternoon flight to Chennai, spent 2 days with our aunt and then reached home safely. During the visit I was happy to get shots of lots of birds including the endemic Brown coucal and Andaman Bulbul. I would surely want to do another trip to Andaman just for birding 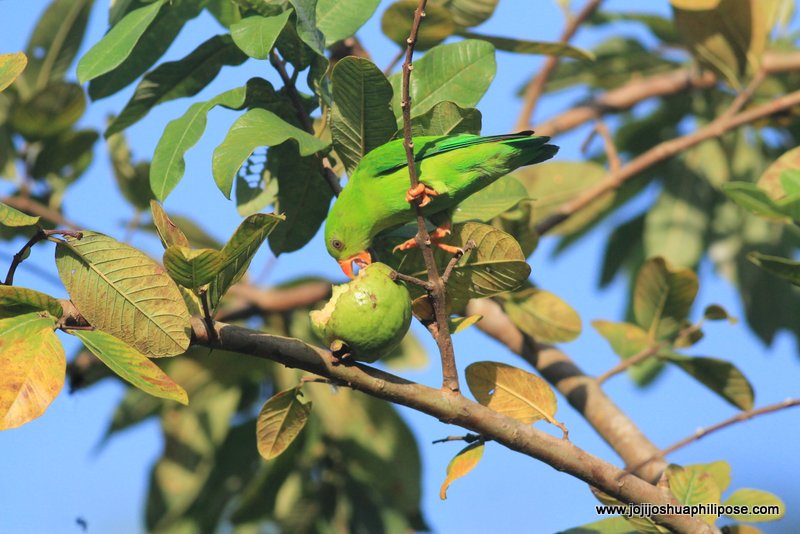 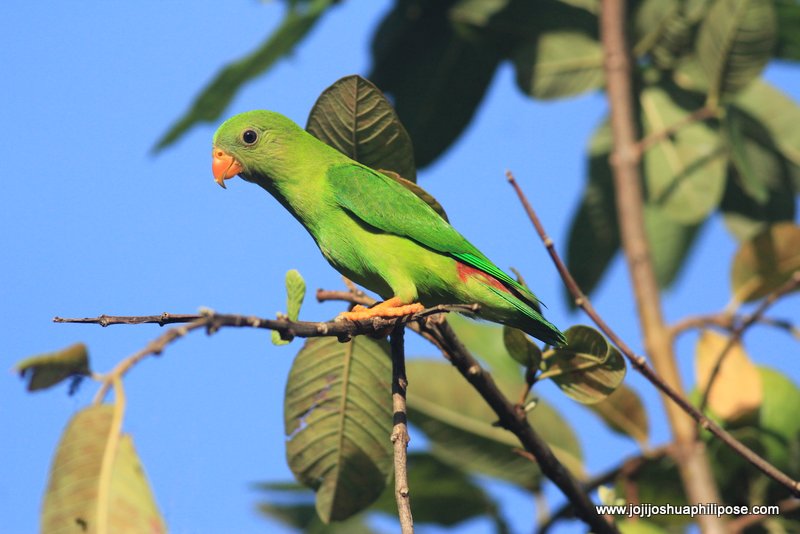 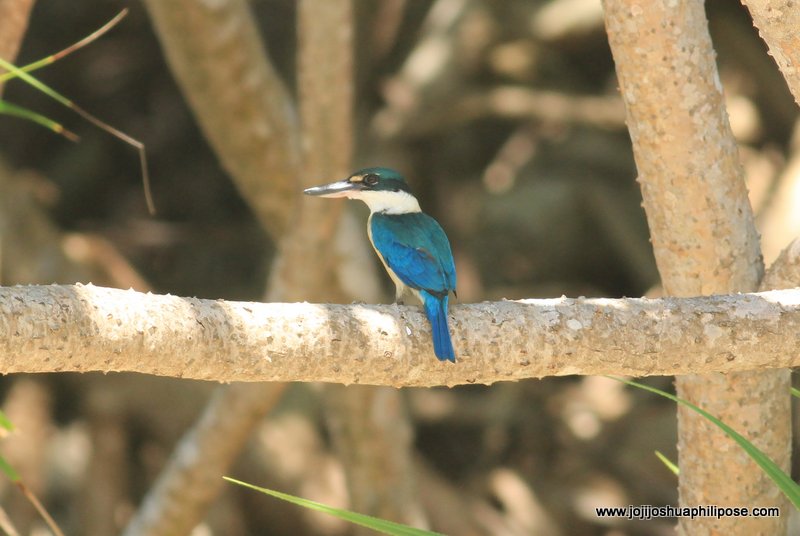 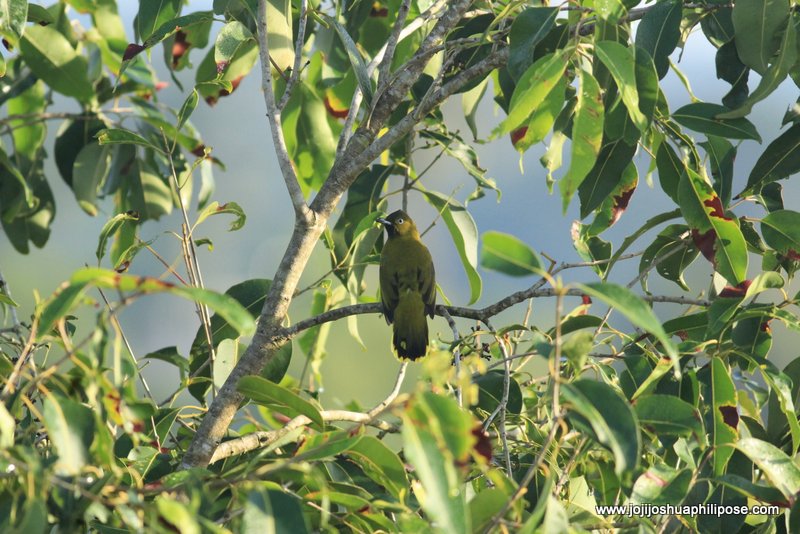