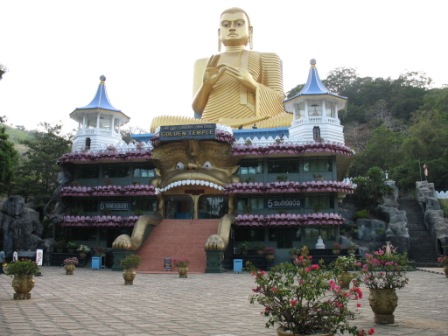 On the way back from England in May 2006, I stayed about 10 days in Dubai and then 4 days in SriLanka. I reached Colombo airport on 14/5/2006. I got the visa on arrival. Papa had already come from Trivandrum the previous day. We stayed with cousin Sajan achachan. Without wasting time,we set out to cover Srilanka in achachan’s wonderful Toyota Verosa.

Buddha, Buddha and Buddha. All around SriLanka, it was he who stood out. It was Sri Buddha’s 2550th birth centenary and SriLanka was in a festive mood. Wherever we went, we saw countless number of his statues.

On the first day, we went to a beach side town named Galle,1 hour drive south of Colombo. Sajanchachan,his 2 children, Papa and myself got a boat,the floor of which was made of glass and we went out to the sea. The life underwater was so colourful and mesmerizing. We enjoyed watching the beautiful fishes and corals. We saw a beautiful turtle too. On our way back, we had an opportunity to get toddy freshly tapped from the coconut tree.

On the second day, Papa and me started off towards east to Pinnawala. We had a driver for the rest of our journey. Enroute we saw on the road, a person who was selling Porcupines and Toddy cats.They were mercilessly tied to chains.

Pinnawala is an elephant orphanage. Little orphan elephants are saved and reared there. Elephants were having bath in the river opposite to the orphanage. There were about 60 of them playing in water and among them was a three legged member. Everybody was eager to take photos with the elephants.

Our car was caught for over speeding twice. I guess it was no different from our place, the way Police hide behind the curves and suddenly jumping out. We passed along a place called Seegiriya. A single large mountain was seen. We were told that there were ruins of a large city on the top of the hill. It was a plateau and from far, we could see stairs to climb the hill.

Our journey continued and we reached a hilly place called Kandi. There was a small  but beautiful lake in the midst of the town. There was a Buddha temple nearby and we saw the largest Buddha statue in the world with Dharmachakra posture(100 feet). We also visited the nearby museum.

Next day we went to Anuradhapura via Pollanaruwa. Anuradhapura had a word heritage city where we saw ruins of Abhayagiriya monastery. It included several Buddha stupas, caves, ponds, halls and museum.

On our way back, we visited yet another Buddha temple. It was really beautiful with gold plated railings around a huge Bodhi tree which was brought from Gaya.

On 18th morning, we flew back to my home town, Trivandrum after one year of life in UK. The icing on the cake was the upgradation to business class. Though the journey lasted only 30 minutes, the experience was exciting.

Srilanka looks almost like Kerala, the only difference being the umpteen number of Buddha statues wherever you look. Thanks very much to Sajanchachan and his family for taking all the pains and making our trip most comfortable and exciting.