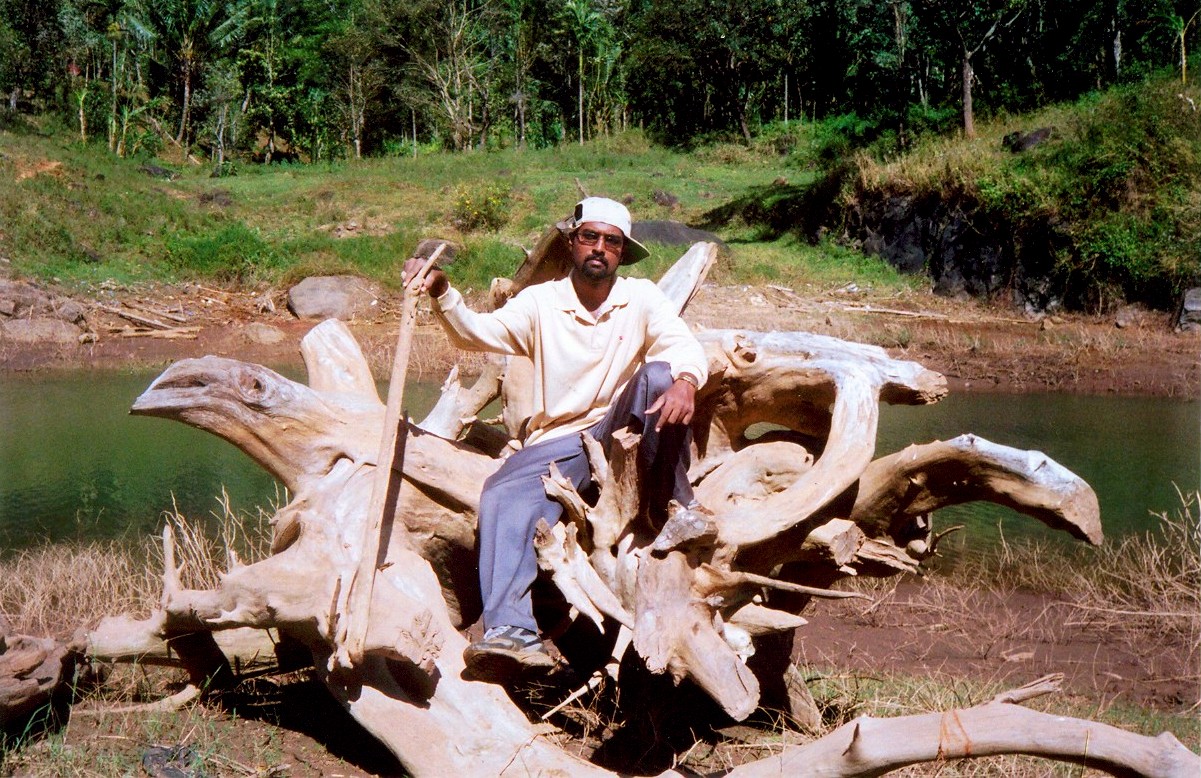 Shattering everyone’s future career plans, the government came up with a new Compulsory rural service plan in 2004.  Some took it seriously but others didn’t. Anyway I was ready to take it and it was a blessing in disguise. Joe had got posting in Kumily which was near to Thekkady. With him I set off to Kattappana for a new life.

With all the big luggage, we took the train from Trivandrum and got down at Kottayam. We took a bus to Thodupuzha and then to Painavu DMO office to collect the joining letter as Assistant Surgeon. From there, we took a jeep to Cheruthoni and then a bus to Kattappana. Both of us stayed in Vimala Lodge. Joe left Kumily the next day.

17/11 My PHC was in a place called ‘20acre’ which was around 3 km from the town. The MO in charge was leave for 3 days and I managed the OP alone seeing around 200 patients.

18/11 I conducted a School Health camp in two schools atPuliyanmala. One of them was a branch of Christ Nagar where I studied in Trivandrum.

19/11 I climbed the Kurishumala hill which was very near to the town. It took around 45 minutes for the climb.  I could see the whole of Kattappana town from there and the view was very beautiful.

20/11 I went to Kumily to see Joe. We went for an evening walk with Shaji and Suresh who were sales tax officers whom Joe had met earlier. We crossed the check post and entered Tamilnadu. We saw a dam inside the forest and huge pipes which took water to Tamilnadu. We saw the town Cumbum from there and it was fantastic.

I took a week off to come to Trivandrum. I was back in Kattappana on first of December. I climbed Kurishumala once more but this time I had a camera with me. For all the trekkings around town I was enjoying  the loneliness. The place was just beautiful and the people were so simple.

2/12 I roamed around the Kattappana town and also the quarry in Puliyanmala.

3/12 I conducted the immunization camp in Kochuthovala.

5/12  After the OPD at 12 noon I walked to a nearby place called Anjuruli, a beautiful place bordered by the Idukki Reservoir. I saw a large tunnel which was around 3-4 km long carried water to drain in the reservoir. I couldn’t resist the temptation of climbing the nearby hill. There was a small teashop at the base and after asking the directions, I climbed up. The route was quite treacherous and there was no turning back. I took a break to sit down and have my packed lunch. All the time I was thinking that I was alone but I was not. As I was having the lunch, I was surrounded by a group of monkeys. Luckily I was not attacked and I quickly cleared the place. The summit of the hillock was picturesque. I could see a wide view of the Idukki reservoir and the Anjuruli, where I came from.  I also climbed another Kurishmala nearby. After watching the beautiful sunset, I climbed down on the other side to reach Nirmala City and from there I walked along the road for about 1.5 hrs to reach Kattappana. I walked for around 8 hours continuously that day.

8/12 I was part of theWagamon- Erattupettatrip. We named it “Tour deJumbo” as Abhishek who was doing CRS in Erattupetta was organizing it along with Joy John from Poonjar. I came from Kattappana, Joe from Kumily, Aby and Shabu from Pathanamthitta, Jujju and Deep from Trivandrum. We stayed at Erattupetta. We were lucky to watch the wonderful fireworks at the Pala Church Jubilee celebrations and we met our classmate Sherin Jos over there.

9/12 We visited the PHC of Joy John at Poonjar. There was a Python caged in a nearby church. We set of to Wagamon in Dandy Chettan’s Jeep. On the way, the tyre plate broke which made a delay of around 1 hr. In Wagamon we roamed around Rolling hills, Pine forest,
Kurishumala ashram and saw the fishes and the 6 feet tall cows who gave around 45 litres milk everyday. Joy and me climbed the Wagamon Kurishumala in 15 min. On the way back we got into a Toddy shop and had meals with fish and delicious frog fry.

12/12 I went to Kumily Church on Sunday. Later Joe, Neelesh, Joy(local guy) and me went to Cumbum in Tamilnadu. And from there to Suruli waterfalls. The irresponsible tourists were dirtying yet another nature spot. We got caught by the Tamilnadu forest guards as we tried to climb up the waterfalls. It seems there was a reserve forest with some dam over there and entry was restricted. Anyway we took photos of the falls. We climbed the Kurishumala in Kumily that evening. God alone knows how many Kurishumala hills have I climbed over these days.

14/12 Kumily was just 1 hour by bus from Kattappana. So I used to do frequent trips. On the way I visited Chellarkovilmedu.The whole place was covered with mist and I could see the beautiful Tamilnadu plains and the Cumbum town during the clearing of the mist. It was quite adventurous to explore the crevices beneath the rocks and I was alone.

15/12 After the night stay at Kumily with Joe we did a trip to Thekkady with Nilesh and Health Inspector Thankachan. We went in the “Vanadarshan” boat owned by the forest department along with a guide named Vijayan. We got the bed sheets from the Hotel Lake palace inside the forest. We got down on the forest banks after around half an hour of boat journey. We saw foot marks of many animals. Our path was blocked by a group of wild boars and we had to wait for some time

till they left. We walked for around 2.5 km to reach Manakkavala Bison Camp. It was a beautiful camp site. Our great friend Health Inspector forgot to bring the Chicken that he bought the previous day. But luckily Vijayan Chettan came out with eggs, rice, jam and other items that he brought during his previous visits. He had been a guide for the last 25 years. Chettan made Chappathi for us. We did an evening stroll around the camp for 2 hours and saw wild boars, a big herd of Indian Gaurs(around 17),Nilgiri Langur, a snake, lot of beautiful birds and  heard sounds of elephants and bear. We had a nice bath in the reservoir at around 6.30 pm and it was already dark .We could only guess the type of animals that watched us bathing. The experience was thrilling but not as thrilling as the wild life stories narrated by Vijayan chettan that night. How could I forget his crepitus laugh.

16/12 We had upma for breakfast. After a 1.5 hr walk along different route we reached the opposite banks of the boat landing area. On the way we saw a group of otters enjoying their time in water. We crossed the lake in a catamaran.In the evening, I took Joe and Neelesh to Chellarkovilmedu. This time there was no mist and everything was so visible compared to last time when I went alone.

18/12 Joe came to Kattappana. I got a bike from Koshy, the health inspector of Champakkara and with our health inspector Mathew, We went to Ramakkalmedu. The place was beautiful with 2 large statues of Kuravan and Kurathi, the rocks and the windmills and also the great view of Tamilnadu plains and cumbum town. We had dinner at Mathew’s house which was just half a km away from the tourist spot.

I went back to Trivandrum to spend Christmas with my family.

31/12 On the way back to Kattappana, I celebrated new year eve with songs and dance in KSRTC superfast bus with strangers. That was really a unique experience.

1/1/05 I visited papa’s friend Mr.V.M.Abraham and participated as chief guest and gave felicitations in their “swayam sahayaka sanghom” meeting.

2/1 After the morning Holy Mass I did trekking to a nearby place called Kallukunnu. The evening trip was to Puliyanmala rock. I really enjoyed the steep climb and the scenic beauty at the top.

3/1 Calvary mountwas near to Kattappana and after the regular OP, I went there alone as always. The view of the reservoir beneath was breathtaking and that’s still fresh in my memories.

7/2 Time has passed so fast. The doctors who got appointments via Public Service Commission filed as case against the compulsory rural service saying that their jobs were in stake. So we were given the option of relieving from the service. As I was midway doing the preparation for a career in UK, I got relieved from the job of Assistant Surgeon, PHC, Kattappana on the 7th January 2005.

15/1 Joe had called me to join him for a medical camp in Pachakkanam near Kumily for the Sinhalese refugees. I couldn’t resist the temptation of another forest trip. I went to Kumily from Trivandrum.After the camp, we went to Gavi. There we saw around 6-7 wild elephants in different places and also a small deer. We visited Pampa dam too. From there around 8 of us took a jeep to Pullumedu.It was the next day of Sabarimala Makaravilakku and the Pullumedu was in the route of the pilgrims coming to Sabarimala especially from Tamilnadu. As we were nearing Pullumedu, the feel of the forest had gone and there were too many people and vehicles coming back after the ‘darsan’.  We literally ate dust. Pullumedu has become ‘mannumedu’. We reached there towards sunset. It was a bigger Wagamon. We could see the Sabarimala sannidhanam and Ponnambalamedu from  Pullumedu. This marked a thrilling end to my most unexpected Idukki life. I found the lone trekker in me. I pushed the limit of an adventurer in me to greater heights. The 2 month long first independent life away from my family marked a prelude to a greater journey  farther away and longer period which boosted my inner self, the great UK life…