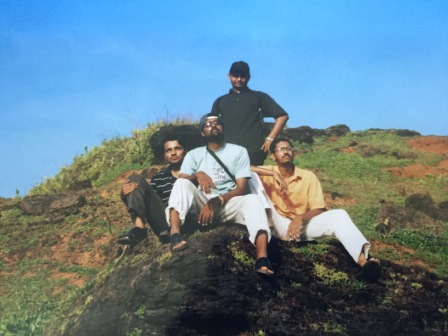 I have been longing for a Goan trip for quite some time. After my internship, along with Jibu, Jujju, Aby, Daniel, Deep and Sarath We finally did it.

We reached Margoa early morning by train and from there; seven of us took one auto to Bambolim. Kiran helped us to get accommodation in the BSNL guest house. Goa Medical college was nearby. The guest house was luxurious, fully, furnished, with AC and TV. We got two rooms and the garden around the guest house was beautiful. Surprisingly we only had to pay Rs 20 per day for this luxury.

We went to Panjim, which was 4 km from our stay, and took 4 bikes for rent, 1 pulser, 1 splendour and 2 passion. Jam packed thrilling sessions for the next 4-5 days. We covered almost entire Goa in our bikes.

Aguada fort had a pretty good scenic beauty and underneath it had a massive watertank which could hold thousands of gallons. It is not in use now.

Mangueshi, Santadurga and Saptakoteshwar temples- the first feeling that we had was that as if those Hindu temples were having Christian layout and Muslim architecture.

In Old Goa, we visited the church where the body of St Francis of Assissi was kept. The church was looking magnificient. There was also a museum opposite to the church.

Ancestral Goa was the next destination, where we saw Goan handcraft. The “bigfoot” didn’t look unusual as people said. We also did a boating there and rowed amongst the swans.

The bike ride to Vasco city and back reminded me of Formula one. The roads were thrilling. Vasco is a posh city.

It was our turn to get to the beaches in Goa. The beauty of the beaches were enough for us not even thinking of the other two things that people usually do in Girls,Ocean,Alcohol.  We were happy with the beach……

Colva, Wagatore, Anjuna, Calangute, Baga, Meeramar…… all these beaches were unique and beautiful. Anjuna was supposed to be a nude beach, well there was nothing special.

We went to DonaPaula which was the meeting point of the great Mandovi and Zuari Rivers.

The night cruise in Mandovi river was 1 hour of enjoyment filled with dance and lights with Goan music in the background.

I happen to see a picture of Dudhsagar waterfalls in Goa and from then onwards I had a severe urge to visit that place. We found that there was only a railway line to that place. To our desperation we were told that the trains to dudhsagar had been indefinitely cancelled due to landslide. Only one day was left for us and I just wanted to go somehow. Most of my friends were reluctant to take that risk of uncertainty. To my great relief Sarath agreed to come with me. We thought we would go as much as possible. I was even thrilled with that uncertainty and I knew any experience would make me happy. It was around 73 km from Panjim.

Me and Sarath started early in the morning in a bike. We travelled around 60 km along ancestral Goa. The road was decent till we reached … Railway station. From there, we were told that there was no road. So we drove by the side of the railway track. After a few kilometers, we found a mud track and drove along it into the forest, crossing the streams, along, away and under the railway track. We reached a settlement which had a temple nearby. The road ended there. We even lost track of the railway line. To our relief we saw few local people and enquired regarding Dudhsagar. They told us to climb a hillock to reach the railway line and follow it for around 2 km to reach dudhsagar. The moment we were nearing the railway line we heard the sound of a train and we ran just to see it. To our excitement, it was a single compartment with 3 engines and it was stopping at the nearby Sonaulim station. We ran towards it. We asked the people in it; Where can we get the ticket?  The answer made us ecstatic, “We are the railway workers going via Dudhsagar falls to repair the track damaged by landslide. Why don’t you get in? We’ll drop you at the Dudhsagar station”. What more do we need? In 5 minutes we reached our dream destination.

Like it’s said, it was a ‘sea of milk’. 2/3rd of falls was above the railway line and 1/3rd below it. The beauty is beyond description. We spent there for quite some time and the moment we started to have our snacks, we were surrounded by monkeys. We had a narrow escape. Filled with contentment, we walked all the way back along the track to where we kept the bike and drove back. On the way back we saw a wild gaur and a beautiful tiny waterfall. As the film in the camera was over, the pictures remain alive only in our minds.

The Dudhsagar trip was a well deserved climax for our trip to Goa. The next day we took our train back to Trivandrum with hearts full of fond memories enough to cherish for a life time.