BIRTH OF A BIRD WATCHER 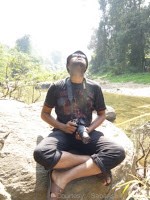 On the eleventh of June, 2007, Hari Sankar and I went for a trip to Thattekkad Salim Ali Bird Sanctuary. It was just another usual nature trek. I didn’t realize that I was nearing a great turning point in my adventurous life.

I was working as Casualty Medical Officer in Kolenchery Medical Mission Hospital and during my free time, I used to go to nearby places for short trips. Hari and Midhun were doing Compulsory rural service in Rajakumari and Rajakkad health centres. That’s how I got to know Dr Jayakumar and the photographer Mohan chettan.

During those times, the proper Thattekkad sanctuary was open for public unlike now. Me and Hari got permission and we walked the entire length of the mud road inside the sanctuary.  We saw nothing except some beautiful butterflies in the deep woods. But we still enjoyed it to the maximum and we wanted to come back and we did it exactly one week after. But this time we took a guide named Sudhish.  He was a very talented and professional naturalist with good experience. He changed our lives.

Your eyes won’t see what your mind doesn’t know. We did not know anything about birds and so we didn’t see anything. Eventhough we were happy, we still were not satisfied and that urge has paid off. We became crazy when Sudhish showed us so many birds on the same way that we walked one week back. The icing on the cake was when Sudhish left us at one place to check for something inside the forest. He came back and called us to come silently. He showed something which was so near to us and we couldn’t see it. The height of camouflage, a pair of Ceylon frogmouth sitting on a low tree branch.  We reached the summit of excitement and watched those nocturnal birds for a long time up close.  Since then we never turned back. We visited the sanctuary several times after that and never without a guide. We were introduced to Dr. Sugathan, who was the director of the Sanctuary. We used to sit with him and were so excited to hear his talks. He never used to get bored in detailing his adventures as well as throwing light towards ornithology and its history.

By this time we learned that our photographic equipments were outdated and we had to upgrade our cameras. The first one that I used was my father’s canon film camera, then I bought canon A610 which I later upgraded to my first Digital SLR Canon D400. For a year I used Fujifilm HS 10 and later came back to Canon 60D along with 18-55 IS lens and a Canon 400 mm 5.6 f prime lens for my ornithophotography.

After I started bird watching, any trip would give me so much of satisfaction. I was so happy even sitting at home watching birds in my backyard. I was seeing birds everywhere.  Subsequently all my later trips were birding oriented.

I used to have frequent visits to Munnar and nearby places for birding with Midhun or Hari. Arippa in Trivandrum was another birding site which we went in February 2008. Our interest in butterflies also arose in this trip. The next three years were relatively dry in my life regarding birding as I joined Amrita Institute of Medical Sciences as Post graduate in Orthopaedics. But opportunities kept on coming, mainly in the form of camps. The sabarimala camp was one of them. I went for 3 yrs in December 2008, January 2010 and January 2011. I was excited and had gone to the interiors of the forest alone as well as the terrace of our building in search of birds. I found around 45 species of birds watching from the roof of our building.

The next year was a turning point in someone else’s life. Dr. Sabarish, PG in Emergency Medicine was interested and he joined me for the trips inside the forest. His interests became a passion and subsequently craze which is still progressing. He is one of my main bird watching mates now.

Dr.Renjit Kumar, who was my thesis guide, is a true nature lover.  He used to find time between his busy schedules to go for holidays with his family as well as heavy nature treks with other groups.  He invited me to join the Kodai Munnar trek in 2010 December organized by National youth hostels association of India. We were joined by Dr. Dnyanesh and Dr.Renjith.T.C. We did the same trek but in a different route in December 2012, but this time it was my father instead of Dnyanesh and Dr.Renjith T.C who joined us. These trips were feast for the eyes regarding birding and as usual I infected my birding passion to Dr. Renjit Kumar. Am I so contagious?  He bought my same camera and the bird Text book. He is also my present birdwatching mate.  When my ego makes my head turn away from common birds in an urge to see new ones to broaden the list, I feel amazed at the passion he has in watching all birds and the excitement in him when he talks about any bird.

Sabarish, Dr. Renjit and me took part for the Kochi Bird race in Nov 2011 sponsored by HSBC. We came in the 5th position with 92 birds. We had a get together in Hotel Abad in Nedumbassery Airport and the chief guest was Ex-minister Jose Thettayil.  It was an opportunity to meet so many bird watchers.

. We had been to Kandakkadavu, a day Sabarish, Dr. Renjit and I would never forget. We saw a darter hanging helplessly on an acacia tree. I climbed the tree.The unfortunate one’s beak was entangled on a fishing net remnant. We rescued the poor bird and saw it flying to freedom. Though I had few abrasions and some myalgia due to unaccustomed job, we thoroughly enjoyed “Operation Darter Rescue”. In Vypeen we saw thousands and thousands of gulls in a single frame.

Whenever we got time we used to go to Thattekkad. This time, the sanctuary proper was closed and we used to go to Urulan thanny and our guides were Vinod or Abhilash. We didn’t miss the lectures of Dr. Sugathan also.

In 2011, March Me and my family had a visit to UAE. When people usually are excited to go for shopping, I was enjoying birding there.

In November 2011, I was joined by Dr. Renjit  Kumar, Dr.Renjith. T.C, Dr.Mohammed Niaz to visit Lakshadweep. Thanks to Dr. Sreejith who was the spine fellow posted as orthopaedic surgeon in Lakshadweep who organized everything.  The subsequent year, I was posted as Ortho Surgeon from August 21st to December 5th. I was joined by my wife, Roshin for a month (She was posted as CMO) and my son and my parents for 2 weeks.  I observed more than 40 species of birds from Agatti and neighboring islands including European Night jar, which I believe is the first record south of Mumbai.

I registered for the Asian Waterfowl census that was supposed to be conducted in Thrissur  Kole wetlands on 8/1/2012. Dr.Nameer was the organizer for the same.Kole survey was started by the famous K.K.Neelakandan in 1992 and it was the 20th survey that I attended.  I went to Mannuthi Agricultural College the day before to attend a lecture regarding bird species identification and conservation. It was very informative. We stayed that night in college hostel.  I got to interact more with birdwatchers all over kerala.

The next day, around 100 birdwatchers were divided into 10 small groups and we were around 10 people who included Dilip, Vishnu and Dr. Prasanth who were part of the Cochin Natural History Society. The trip was so exciting. The icing on the cake was in  the evening. We got all our data and went to Vyloppilli hall in Thrissur for the All Kerala Bird watcher’s meet-“Pakshi nireekshakarude sangamam”. There were many eminent people including M.K. Prasad, C.Sashikumar, Dr.Nameer, Satyan  Meppayur, C.A. Abdul Basheer , Warden of Gavi whom me and Roshin met during our trip.  I met him for the first time in Thekkady duing one of the greatest trips of my life with Hari, Midhun, Sarin and Lakshmanan.There were around 200 people for the birdwatchers meet and I met people like N.A. Naseer over there.

It was 21st January, 2012 and I turned 32. We were in Trivandrum for Roshin’s conference. I dropped her in Hotel Muscat and went straight to Akkulam in my car with my camera. As I was doing birding, I saw two guys with camera and I went upto them. They were Ramesh and Ajith. I joined them for birding. In between I saw them noting something and when I enquired, to my surprise, they showed me the same Asian Water fowl census form that we used for the Kole survey. I became part of the census unknowingly for the second time in the same month. They were excited to hear my happiness of getting one of the greatest birthday gifts from two strangers. Oh! Really it was a great surprise gift for me. We visited Veli and Perumathura also.

Eventhough  Ernakulam was the main area for bird watching due of my job, I had opportunities to go to places like Punchakkari, Ponmudi in Trivandrum, Chavakkad, Peechi, Chimmini  in Thrissur, Kumarakom, Pathiramanal  and Kallara in Kottayam as well and the list doesn’t end.

Even though I gained so much information from my bird books of Bikram Grewal, Krys Kasmierczak and Dr. Sugathan’s autographed “Birds of Thattekkad”, nothing gives me more pleasure and excitement than going to the forest and listening to the songs of the birds. Field guides are of no use unless you go into the field.

Dr. Salim Ali…., I envy you. I am still a student who is getting more and more confused on listening to those bird calls, more and more ignorant on seeing new species.

I am still like a child; the excitement continues to push me further and deeper into the world of birds and their conservation.